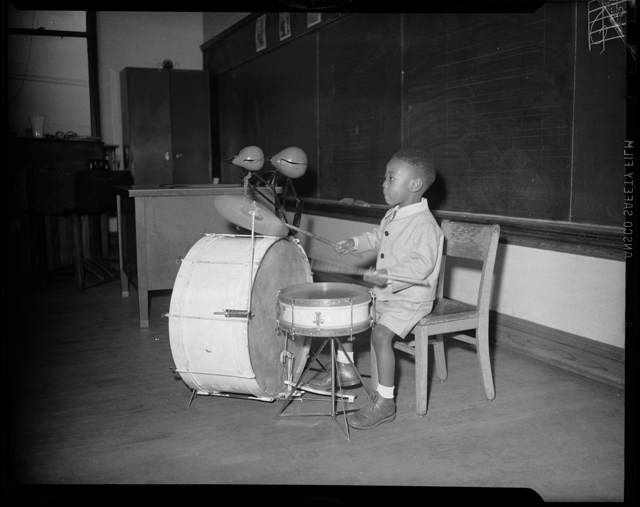 Roger was 3-1/2 year old when his family first discovered his early talent for playing drums.

He began playing professionally at the age of fourteen. He led his own group at Carnegie Music Hall when just sixteen. "I've had a love for music as long as I can remember. He was encouraged by his older brothers Lawrence Jr. and Norman who were musicians at that time. Additionally, Roger's son Roger Jr. and Norman's son Gregory have followed in their footsteps as professional drummers.

In August of 1962 began Roger's first major road job. He joined Stanley Turrentine (also from Pittsburgh) and Shirley Scott at the Hurricane in the Hill District of Pittsburgh.

In 1964 Roger went to New York to join the Horace Silver Quintet. While with Silver, he toured Europe twice and appeared at the Monterey Jazz Festival, There, he was interviewed by renowned jazz writer, Leonard Feather. A summary of that interview is included in the Encyclopedia of Jazz in the Sixties

Roger recorded three albums while working with Horace Silver.
They were "Song For My Father", "Cape Verderan Blues" and "Jody Grind". The Song For My Father album is one of the most legendary album's of our time, still being played by most jazz radio station as a popular hit. His tenure with the great Horace Silver lasted a little over three years from 1964 through 1967. During those three albums recordings he played with such giants as, Joe Henderson, James Spalding, Tyrone Washington saxophone, Teddy Smith, Larry Ridley bass, Woody Shaw, Carmell Jones trumpeters and J.J. Johnson trombone.

Shortly after leaving Silver, Roger began working with Ray Charles. This was his first experience working with a Big Band. While with Ray, he toured Europe and various cities throughout this country. He Preformed at the Coconut Grove in Los Angeles and the Newport Jazz Festival.

With various groups, Roger Humphries has performed at Carnegie Music Hall, the Village Gate and the Apollo Theatre in New York. He has also played at the Bohemian Caverns and Shelly Manne's Manhole in Los Angeles; the Penthouse in Seattle, Wash.; Pep's Lounge and Showboat, Philadelphia; the Jazz Workshop, Boston; Ronny Scott's in London, and many other places.

In January of 1980, Roger toured Europe with organist Richard "Groove" Holmes and tenor saxophonist Willis Jackson.  During this tour, Roger performed in France, Spain, and Holland. An Album was also recorded with the Black and Blue Record Company.

After playing with various groups around the country, ace drummer Roger Humphries decided to organize his own group in 1972 which he calls RH Factor and in 1996 he assembled Roger Humphries' Big Band. Roger gives special thanks to Dr. Harry Clark, principal of The Pittsburgh High School for the Creative and Performing Arts (CAPA) who has allowed him to have such a beautiful experience teaching the kids at the school, and also to Dr. Nathan Davis who gave him an opportunity to teach and shares lives with students at the University of Pittsburgh. Roger has influenced the careers of a number of his students and musicians also through participation in a number of clinics such as the, Slippery Rock University Summer Jazz workshop, Mellon Jazz Masters Class and Concerts and the teaching goes on especially on the stage.

On February 23, 2008 the state of Pennsylvania and the city of Pittsburgh issued a proclamation as Roger Humphries Day.  He was given a certificate of recognition for his legendary performance in the field of music and teaching.

You can see Roger and RH Factor group at the most popular
Jazz club in the city of Pittsburgh, CJ's Lounge, located on
Penn Ave. at 29th Street in the Strip District.